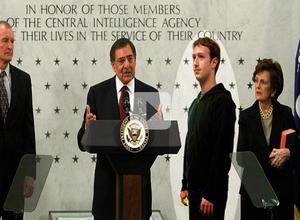 According to a latest video report from the satirical tabloid and website The Onion, Mark Zuckerberg is an American CIA agent codenamed “The Overlord” and the director of CIA’s “Facebook Program”. The report also confirms Zuckerberg of receiving a “Medal of Intelligence Commendation” for his extraordinary work with the Facebook program.
Just recently, WikiLeaks founder Julian Assange in an interview with Russia Today called Facebook “the most appalling spy machine that has ever been invented.”

The report further gimmicks several other popular social media tools such as:
Twitter (useless as far as data gathering goes)
Foursquare (created by Al Qaeda)
Farmville (responsible for pacifying 85 million people after unemployment rates rose)
Check out the video report embedded below and decide yourself whether Zuckerberg is a Hero or a Villain?

How to convert your images into Text Portraits

Your boss can read your Gmail drafts