An Open Letter to Conan O’Brien 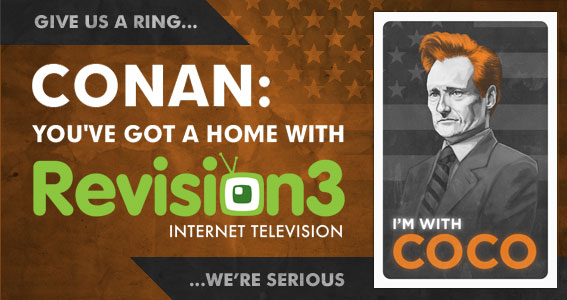 Have you seen the internet lately?  It’s huge!

Now I know what you’re thinking: “This is absolutely the offer I’ve been waiting for.”  I’m sure you’re also thinking: “but I have a traditional TV network show right now, and offers from others, why would I leave the traditional networks?”  One word, Conan: the future.  (OK, that’s two words).  I know you don’t have a big footprint in online media at the moment, but take our word for it: Internet television is the future.  The space has seen a 35% average increase in advertising spending in 2009.  (Just think how many cigars that would buy for Triumph The Comic Insult Dog).

Here’s another benefit the internet can offer: no official air time. That’s right. NO AIR TIME.  This is the world of non-linear entertainment: some may watch your show at 11:35, some at 12:05, some at 10:00…and who cares….you finished shooting the show at 6:30 and are asleep by then anyhow!

To sum up, Conan, you have the keys to the kingdom here at Revision3. You want to change our studio around?  Done.  Want to move any of our existing shows to 10pm Please do.  Want to give Andy his own show so he can finally truly control the universe?  Done.  You name the game, we’ll make it happen.

Other benefits:
– A fantastic creative and supportive working environment
– No network censors
– Top notch adsales team monetizing your show
– Complimentary broadband
– “Competitive” salary (you’re going to have more money than Oprah from NBC, so what do you care?!)
– Managed social media strategy, building a dedicated audience around your show
– Decent benefits

Call me any time, day or night.  As one “really tall guy” to another, I promise never to pull a Jeff Zucker on you. Here’s hoping Revision3, internet television, can be the new home to countless string dances in the future!

TCS to give salary hike