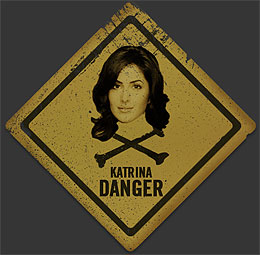 According to a study by McAfee, Katrina Kaif is the most dangerous celebrity in the Indian cyber space. While Katrina has a huge fan following and is one of the most searched celebrities on the Web, this would be an awkward sobriquet. She is followed by Deepika Padukone and Kareena Kapoor in the ‘Most Dangerous Indian Celebrity’ revealed by McAfee after they researched popular culture’s most famous people to reveal the riskiest celebrity sportsmen, actors, and politicians across the Web.

“In a celebrity crazy country such as India, cyber criminals find it very lucrative to use the names of popular figures as keywords to lure people to websites with malicious software. This year’s study found movie stars top the “most dangerous” list, while sports stars and politicians are among the safest.”

The top 10 celebrities in India with the highest risk percentages are:

Here is a list of India’s TOP 10 Most Dangerous!

McAfee researched more than 2,600 popular keywords to assess the degree of risk for each.

Reports indicate that key words like “Katrina Kaif” are commonly used to lure people into clicking on them. Cybercriminals are making the most of such popular search terms online, and are enticing searchers to download files carrying malicious software, as a result, exposing their personal and financial data.

India faces an above average risk from risky search queries. So next time you are searching for any of the terms listed above, be careful about what you click on!

How to Add All Friends to Invite Facebook Page, Group