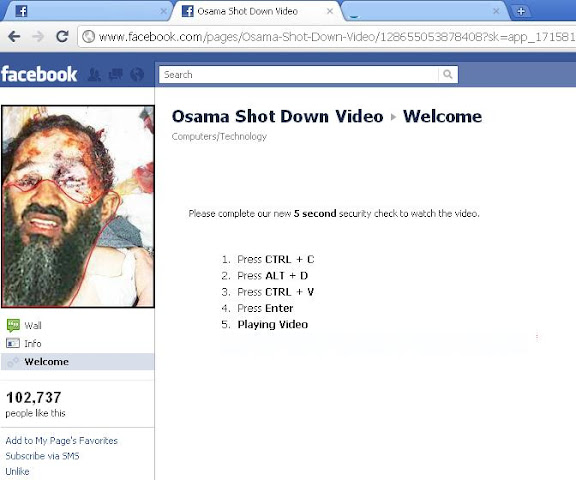 Today morning, a new kind of scam is spreading on Facebook where another fake Osama Bin Laden video is being circulated on Facebook. The new spam is spreading with the text; “Watch the Osama Shoot Down video – Osama Dead – Censored Video Leaked – Osama is dead, watch this exclusive CNN video which was censored by Obama Administration due to level of violence, a must watch. Leaked by Wikileaks.”

The scammers are using the name of the whistle blowing organization; Wikileaks, to make people think that the video is genuine. However, the video is a scam. Clicking on the link will take you to a fan page (which is being liked by more than 45K people right now) and ask you to complete a new 5 second security check before you can watch the video.

However, following the steps listed does nothing and the fan page will instead post a message to your wall and your friends with a link to the fan page. This Facebook scam is a bit different from yesterday as it does not ask users to fill out stupid surveys, but once this gets widespread it could exploit users differently.