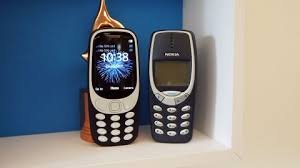 NEW DELHI: Nokia 3310, a feature phone that had sold 126 million units globally before being phased out 12 years back, will now be available in a revamped avatar in India, marking the iconic brand’s second innings in among the world’s largest handset markets. HMD Global, which owns the rights to the Nokia brand, on Tuesday launched the “2G feature phone” at Rs 3,310. It will be available across top mobile stores in the country starting May 18.

The Nokia 3310 sports a 2.4-inch QVGA (240×320 pixels) colour display, compared to the 48×84 pixel resolution of the original. The handset runs on Nokia Series 30+ OS and comes with 16MB storage and supports expandable storage via microSD card (up to 32GB). On the back is a 2-megapixel camera with LED flash; the feature phone also offers FM radio. Nokia 3310 (2017) packs a removable 1200mAh battery that offers 22 hour talk-time and month-long standby time. With the Nokia 3310 (2017), HMD Global also brought back the classic Snake game which has been optimised for the new colour screen.