McAfee VirusScan Antivirus, although considered a resource hog is one of my favorite antivirus software after kaspersky. The latest product from the industry, McAfee Antivirus 2010 is now available for free download with a valid 1 year original license as a part of a special promotion. The latest 2010 version is claimed to be much faster and lighter than the predecessor(2009).

Even though for now, most of the features of McAfee 2010 will be same as that of the previous version. This is because McAfee usually donâ€™t operate on a yearly update model and the updates will available as incremental changes throughout the year. So donâ€™t get shocked if you donâ€™t see brand new features in McAfee Antivirus 2010 when compared with their current 2009 version. So can this be said â€˜asâ€™ McAfee faking its customers selling itâ€™s 2009 antivirus product in a brand new 2010 box ? According to me, the answer is No, since the current customers of the McAfee Virusscan 2010 will be automatically pushed the upgrade of the latest version as soon as it becomes available. or when 2010 comes out of Beta.

For this goto a special McAfee promotion page of vmware.

There you can see a download link for the free 12 month complimentary trial version of Mcafee 2010 antivirus.

You will be required to register for receiving the 1 year â€“3 user activation key.

After registering, download a setup file as show above and run the application. Login to receive your free product key and install Mc Afee virusscan plus 2010 (3 user). 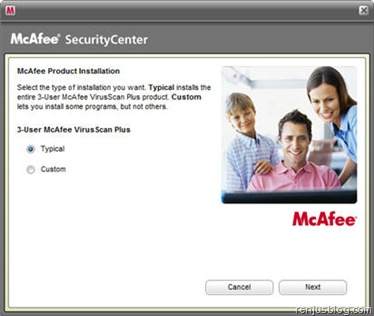 Install the product valid for 1 year and remain protected.

The latest McAfee 2010 seems to much faster than the previous version but runs slower when compared to its competitors like kaspersky. McAfee VirusScan Plus offers proactive PC security to prevent malicious attacks while surfing online and while downloading files.

Other feature included with this product is the much well known McAfee SiteAdvisor. As the name suggests, it helps users avoid unsafe websites according to itâ€™s web safety rating.