India has given the maker of BlackBerry phones a deadline of 31 August to provide the government access to all of its services or face being shut down.

The country fears the device could be used by militants and insurgents in a repeat of the 2008 attack on Mumbai that left 166 people dead.

The row is the latest in a long running dispute between Research in Motion (RIM) and international governments.

The central issue is how governments monitor the encrypted traffic from BlackBerry devices.

The United Arab Emirates (UAE) was the first country to propose a block on the devices, saying they posed a “national security risk” in their ability to send messages and e-mail without the authorities having the ability to monitor the communications.

In 2008, the BBC reported that RIM was at loggerheads with the Indian government over demands that it help decrypt suspicious text messages.

RIM’s answer then, as now, was that it does not allow any third party – or even the company itself – to read information sent over its network. 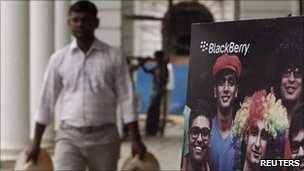 There are over 1 million BlackBerry users in India

In July this year, RIM responded to a report in India’s Economic Times that said the firm would allow Indian security authorities to monitor Blackberry services.

The firm said it co-operated with all governments “with a consistent standard and the same degree of respect”, but denied it had ever provided anything unique to the government of one country that it had not offered to the governments of all countries.

Government officials said that if no solution between themselves and RIM was found, then they would ask mobile phone operators to block BlackBerry’s messaging and e-mail until RIM provides access to data transmitted over the handset.

A Home Ministry spokesperson confirmed that it had now issued a deadline to RIM to comply with its demands.

This differs from Saudi Arabia’s demands, who only wanted access to the handsets messaging system.

There are more than one million BlackBerry users in India, with the continent slated to be a significant market for smart phone manufactures as the country expands its network coverage.