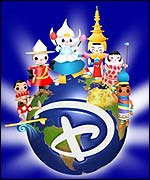 Quote:The game is based on Disney’s animated cartoon movie. You take control of Hercules, son of the god Zeus and a mortal woman, the strongest man in the world and the legendary hero in the Greek mythology. Your goal is to prove yourself worthy of being admitted to Mount Olympus, the residence of gods, and to become a god yourself. You must commit heroic deeds and overcome various obstacles to show your strength and courage. Hades, the overlord of the dead, is making it even more difficult for you by sending fearsome Titans to stop you.

This is a 2D platform action game. Hercules can jump, grab ledges, swing on poles, and jump while running. He has a variety of attack moves at his disposal. He can execute a basic attack with his sword, or pull out different combo attacks. He can also Power Punch enemies, but he needs time to charge for this powerful attack. He can even slam the ground to reveal secret areas by performing a certain move while jumping. There are also different power-ups to collect, such as coins to grant bonus points at the end of the level, Hercules Action Figures to increase your hero rating, and upgrades to your sword – Sonic, Lightning, and Fireball swords. Quote:Chip’s idea is to race around Walt Disney World Resort and collect all the pieces of the Fireworks Machine. If they get some friends to help too, they could find all the parts and put the machine back together in no time! You’ll be speeding around 13 raceways based on popular Walt Disney World Theme Parks and Water Parks, including famous attractions like Space Mountain, Pirates of the Caribbean, Rock ‘n’ Roller Coaster, and The Jungle Cruise! Quote:This game was made two years after the release of the well known cartoon that carries the same name. The cartoon was one of the best and most successful Disney’s productions, and the game doesn’t fall back much.

It features digitized music and speech that we all liked so much back in 1996, and it also features marvelous, colorful and fluid graphics. You play the character of Young Simba. The gameplay is pretty simple and straight forward; you run around the jungle avoiding obstacles and pesky creatures that are up to no good.

As you progress through levels, you grow and the roar ability gets more powerfulas, as well as the paw strike. Every few levels you will encounter a ‘boss’ that you have to defeat. The only downside to the game that I can think of is that it gets a little monotonous after a while, and once you are dead you have to start all the way from the beginning. That can be pretty frustrating, especially once you get to the harder levels. Quote:Pinokio is a colorfull platform game for every child. It is the story of a puppet, made by woodcarver Gepetto, who learns about being a real boy. Your main task is to find a Blue Fairy,
she can turn poor Pinokio into a real boy. But you have to be careful, many opponents will try to stop you in your great journey. HIPPO HOP
The main aim of this game is to let Timon jump onto various “stepping stones” in the river, collecting bugs for Pumbaa’s barbeque – all the while avoiding falling in the river. The controls are easy – just use the cursor keys to jump and collect.

BURPER
This is my second favourite in this pack. Timon shakes a tree which releases bugs which in turn Pumbaa kills with his foul smelling burps – you do have to watch out for the bad bugs though and for heavy fruit and bugs landing on his head or else he will get knocked out!

SLING SHOOTER
It’s like being at the fair all over again! There are some real (and some fake) targets in the shape of fruit and animals which you must shoot with your berries. The quicker you shoot them the quicker you get to the next level.

BUG DROP
A baby’s version of Tetris. Match up the coloured bugs and try to beat your opponent by having the least amount of bugs in your trench. Make sure that Pumbaa doesnt eat them all though!

JUNGLE PINBALL
The king of the arcade is brought to life in the jungle with gophers and other animals blocking your way as you try to get the highest score in much the same way as usual. This is my least favourite of them all as there seems to be too much activity going on all the time.